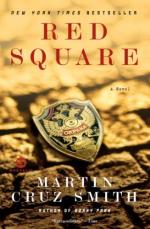 Get Red Square from Amazon.com

Everything you need to understand or teach Red Square by Martin Cruz Smith.

Red Square is more successful in its treatment of these broader social concerns — the state of Russia and Russians in 1991 — than it is in the treatment of its dramatic themes. For example, the love theme which drives the final two-thirds of the narrative seems conceived as a cinematic sequence of encounters between Arkady and Irina, with conventional obstacles and conventional overcomings, all leading to joined hands on the steps of the White House. The obstacles even include a perfunctory "are you here because you love me, or because your case brought you" complication. The sense of duty with which Irina feels herself to be competing remains one of Renko's virtues. Renko is motivated by a desire to avenge the murders of his informerfriend and of his assistant-friend, as well as by his professional integrity.