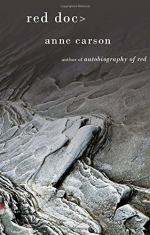 Get Red Doc> from Amazon.com

Everything you need to understand or teach Red Doc> by Anne Carson.

Red Doc>, the sequel to Autobiography of Red, is an experimental novel by Anne Carson. Written mostly in narrow columns of sporadically punctuated prose, Red Doc> continues the tragicomic, mythology-inspired romance of Geryon and Herakles, now named G and Sad But Great. Like Autobiography of Red, the plot of Red Doc> is episodic, driven by waves of language rather than dramatic incident, but the general tone has changed: emotion has been largely traded for thought, immersion for detachment, realism for absurdism, and mythology for modernity. Whereas Autobiography of Red was a heartbreaking portrait of the artist as a young red man with wings, Red Doc> is a painful (yet funny) snapshot of the disillusioned artist as a not-so-young man, who has come to prefer Proust to philosophy, comfort to adventure, and irony to grief.

Anne Carson
4,525 words, approx. 16 pages
Albert Einstein credited his discovery of fundamental laws of the universe to his ability to ask the simple questions. Much the same can be said of Anne Carson, who in her poetry and essays asks quest... Read more
Download the Study Pack

You might also be interested in:
Anne Carson
Autobiography of Red
Eros the Bittersweet
New Rule
Float