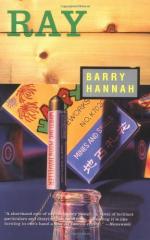 Get Ray from Amazon.com

Everything you need to understand or teach Ray by Barry Hannah.

Ray is punctuated by death and loss.

One of the central episodes in Ray stands as a virtual paradigm for the entire novel. Sister Hooch, a daughter of an impoverished couple and passionate lover of Ray himself, struggles to achieve fame through her singing.

But almost as soon as she finally has her hit record and earns for herself some ease, the local Baptist minister kills her. Death is close at hand, familiar, unexpected, inevitable.

Ray lives in constant awareness and defiance of death. Life for him is a commercial airliner about to crash; it falls to Ray to take the controls, order another double vodka, and safely crash-land. Ray's lust for life — for sex, pleasure, and happiness — affirms life and, at least momentarily, cheats death.

To Ray, death and "Constant Misery" are as much a part of the human reality as life and happiness. He...

Barry Hannah
1,576 words, approx. 6 pages
Since 1972 Barry Hannah has published two novels and a prize-winning collection of short stories. His third novel, Ray, is scheduled for publication in fall 1980. While some stories and novel segments... Read more

Barry Hannah
8,595 words, approx. 29 pages
As is probably the case with all twentieth-century writers of the American South who deal in quirky narratives replete with violence, Barry Hannah has had his share of encounters with critics and read... Read more
Download the Study Pack