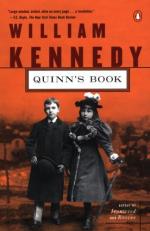 Get Quinn's Book from Amazon.com

Everything you need to understand or teach Quinn's Book by William Kennedy.

As in Kennedy's other novels, a major theme in Quinn'sBook is regeneration. Just as Albany transcends the destructive ice, flood, and fire that open the novel, so does the United States transcend the effects of the Civil War. That the country is slowly regenerating is evident as Daniel Quinn sits on the veranda of Saratoga Springs' United States Hotel and reads in the Tribune about a Confederate officer who says the battle of...