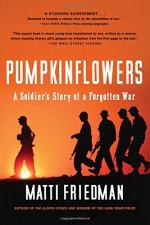 Get Pumpkinflowers: A Soldier's Story of a Forgotten War from Amazon.com

Everything you need to understand or teach Pumpkinflowers by Matti Friedman.

Pumpkinflowers: A Soldier's Story of a Forgotten War Overview

Pumpkinflowers is a combination of memoir and historical nonfiction about the war between Israel and Lebanon/Hezbollah in the 1990s. It focuses on the stories of Israeli soldiers who occupied one specific hilltop outpost, called the Pumpkin, in the Isreali security zone in southern Lebanon. Part One is told through the eyes of a soldier named Avi and "is about a series of incidents beginning in 1994" (2). Part Two is about the civilian efforts to remove Israeli troops from Lebanon. Part Three focuses on the author's personal experience as a solder at the Pumpkin, and Part Four is about his later travels to Lebanon after the end of Israeli occupation. Pumpkinflowers explores themes of loss of innocence, the significance of marginal events, altruism vs. egotism, the role of the media in military politics, and the origins of the 21st century Middle East.

The Pumpkinflowers: A Soldier's Story of a Forgotten War Study Pack contains: