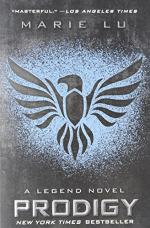 Get Prodigy: A Legend Novel from Amazon.com

Everything you need to understand or teach Prodigy A Legend Novel by Marie Lu.

Marie Lu's dystopian science-fiction novel, Prodigy, is the second book in the Legend trilogy. It explores a world in which the United States has been divided into two warring countries, the Republic and the Colonies. Day, an orphaned boy from the slums of the Republic and June, the Republic's prized military prodigy turned rogue, are on the run from the Republic's military when they join the Patriots, an underground resistance determined to assassinate the leader of the Republic: the Elector Primo Anden Stavropolous. The novel explores themes of class, militarization, and individuality.

You might also be interested in:
Legend
Champion: A Legend Novel
Warcross
Wildcard
The Kingdom of Back