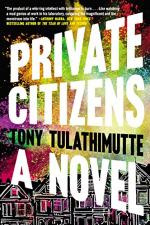 Get Private Citizens: A Novel from Amazon.com

Everything you need to understand or teach Private Citizens by Tony Tulathimutte.

In his novel, Private Citizens, Tony Tulathimutte chronicles the struggles of four friends as they embark on lives riddled by insecurity, ambition and self-destruction in the millennial modern world of San Francisco. It is two years since the four friends have graduated the prestigious Stanford University class of 2005, and they each have, up to this point, pursued differing paths according to their interests. As the novel progresses the four friends struggle to understand their place in the future and recognize how they interact with their environment. Tulathimutte's novel explores themes of reliance, identity and self-exploration.