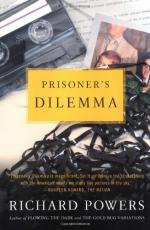 Get Prisoner's Dilemma from Amazon.com

Everything you need to understand or teach Prisoner's Dilemma by Richard Powers.

A major theme of Prisoner's Dilemma is that, in the face of possible extinction, humans have a continuing need to create and to record their history. The entire Walt Disney project, sponsored by the highest levels of government, is to create an historical artifact. Eddie Hobson with his tape recorder, ever the history teacher, races against time to do the same thing.

In Three Farmers on Their Way to a Dance (1985; see separate entry), Powers explored the meaning in life, as he has in his subsequent novels. In this novel, he seems to suggest that although humankind is spinning out of control toward annihilation, it must leave its mark. The presupposition underlying this need seems to be that some form of intelligent life will eventually find the artifacts that a defunct civilization, that a no-longerexistent species, has left behind on its planet.