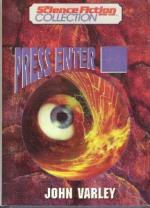 Get Press Enter from Amazon.com

Everything you need to understand or teach Press Enter by John Varley.

The premise is a common one in science fiction. Somewhere, computers have acquired intelligence and have learned how to murder those who uncover their secrets. As Foo explains, it is "the old 'critical mass computer' idea, the computer that becomes aware, but with a new angle. Maybe it wouldn't be the size of the computer, but the number of computers." Apfel asks her, "Wouldn't it ... run our lives? . . .

Would it take over?" Foo points out that such a nonhuman intelligence could be unfathomable: "Why should it care? How could we figure what its concerns would be?" This thin premise unifies a story that is primarily about two people who bear physical and psychological wounds that make them prisoners of the past.

Prisons of past, present, and future occupy most of the action of the story.

It opens with Apfel being held captive by his telephone, which rings persistently...