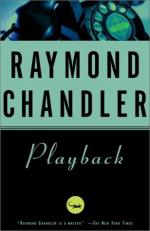 Get Playback from Amazon.com

Everything you need to understand or teach Playback by Raymond Chandler.

A major theme in Playback is the author's self-conscious treatment of the hard-boiled genre. In the later stages of his career, Chandler frequently expressed his discontent with its limitations, insisting: "From now on I am going to write what I want to write, as I want to write it. Some of it may flop.

There are always going to be people who will say I have lost the pace I had once, that I take too long to say things now, and don't care enough about tight active plots. But I'm not writing for those people now."

Indeed, he was not. The Long Goodbye, Chandler's second last novel, and arguably his best, is a far cry from the two-fisted style of the stock hard-boiled detective stories of the pulp fiction magazines. In this poignant, at times almost reflective book, Chandler pushes the boundaries of the crime genre when...

Raymond (Thornton) Chandler
14,485 words, approx. 49 pages
Upon the publication of his first novel, The Big Sleep (1939), Raymond Chandler was hailed as one of the leading practitioners of the American hard-boiled detective novel, but he received virtually no... Read more
Download the Study Pack