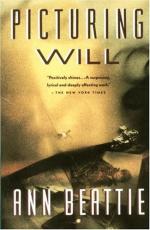 Get Picturing Will from Amazon.com

Everything you need to understand or teach Picturing Will by Ann Beattie.

The central theme of Picturing Will is the nurturing of a child. The major adult and child characters are seen as they touch the life of the boy Will, whose future is threatened when his father abruptly deserts the family shortly after presenting his mother with a bouquet of flowers. Will's situation reflects the plight of many modern-day children who are compromised emotionally and financially by divorce. Yet Will's problems have only begun with the departure of his father, for the boy is later subjected to other disturbing encounters with "adult" life.

These include the sexual abuse of a slightly older friend, Spencer, by D. B. Haverford, aptly nicknamed Haveabud, Will's photographer mother's agent, who also is Mel's old school friend.

(Spencer, whose mother is on her third husband, is the son of a former male business partner and lover of Haverford's.) Throughout most...

The Picturing Will Study Pack contains:

Ann Beattie
7,771 words, approx. 26 pages
Ann Beattie is a novelist and short-story writer whose evocations of American life at the end of the twentieth century have earned her a wide readership and sustained critical engagement for more than... Read more

Ann Beattie
11,033 words, approx. 37 pages
Ann Beattie's powerful contrast in her writing of tellingly detailed descriptions and stark silence has caused her work to be placed in the contemporary canon of literary minimalism, a movement identi... Read more
Download the Study Pack