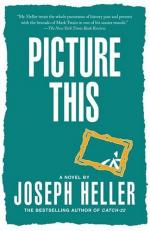 Get Picture This from Amazon.com

Everything you need to understand or teach Picture This by Joseph Heller.

In 1986, when Heller was composing Picture This, which he originally entitled Poetics, he remarked that his manuscript was "becoming a book about money and war." Although clearly an oversimplification, his statement nevertheless does identify two of the novel's predominant concerns.

Money references pervade the narrative as Heller chronicles consumerism from the invention of money by the Lydians in the seventh century before Christ to the rise of banks and corporations in the Netherlands in the seventeenth century and then to the entrepreneurial maneuverings of Cornelius Vanderbilt and J. P. Morgan in the nineteenth century. Heller's exploration of capitalism centers most strongly, however, upon Rembrandt, whose financial rise and fall parallels the economic fate of the Dutch Republic.

As Heller portrays him, Rembrandt is embroiled in a seemingly endless series of financial woes concerning his wife's dowry, inheritance, and will, the high cost of real estate, collecting and paying...

The Picture This Study Pack contains:

Joseph Heller
5,394 words, approx. 18 pages
When Joseph Heller learned that the New York Times Book Review's response to his first novel was negative, he and his family were terribly depressed. "Waiting for that review to come out," he later to... Read more

Joseph Heller
3,058 words, approx. 11 pages
Jospeh Heller was born 1 May 1923 in Brooklyn, New York. His father died in 1927. After graduating from Abraham Lincoln High School in 1941, Heller joined the Twelfth Air Force. He was stationed in Co... Read more

Joseph Heller
12,613 words, approx. 43 pages
Joseph Heller has established himself as a major satirist in the field of contemporary American fiction. A new phrase was added to the American lexicon from the title of his first novel Catch-22 (1961... Read more
Download the Study Pack