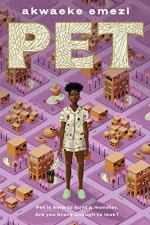 Get Pet (Akwaeke Emezi) from Amazon.com

Emezi's novel Pet is the story of a girl named Jam and her best friend, a boy named Redemption. Jam accidentally brings a creature through her mother's painting, and this creature – named Pet – announces that there is a monster on the loose, though city officials insist that all the monsters have been rounded up years earlier. Jam and Redemption help Pet try to identify the monster, and Redemption realizes that his younger brother is the victim and his uncle is the monster Pet seeks. The novel's main themes are self-identity, facing reality, and the relationship between children and her parents.