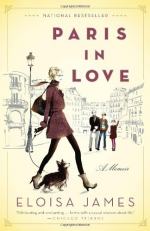 Get Paris in Love from Amazon.com

Everything you need to understand or teach Paris in Love by Eloisa James.

Paris in Love: A Memoir is the recollection of an American family during their year-long sojourn in the City of Light. The author, best-selling romance novelist Eloisa James (the pen name of Shakespeare professor Mary Bly), took a year’s sabbatical from Fordham University in response to her cancer diagnosis—a diagnosis that came two weeks after her mother succumbed to the disease. With her husband (also a literature professor), teenage son, and ten year old daughter in tow, James spent a year in Paris, chronicling her flight from a life which was choking her with illness, anguish, and the constant grind of work. The resulting book sounds neither like the author of a historical bodice ripper nor a Harvard and Yale-educated academic; rather, it is the often witty, sometimes heartbreaking voice of one using a collection consisting of primarily short anecdotes, musings, and vignettes to contemplate themes of self-exploration, survival, family, and freedom.