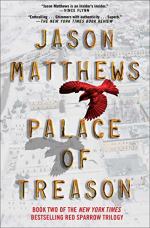 Get Palace of Treason from Amazon.com

Everything you need to understand or teach Palace of Treason by Jason Matthews.

In Palace of Treason by Jason Matthews, double agent Dominika Egorova must protect herself against attempts on her life by her own boss in the SVR as she gets close to Putin to get secret information needed by the CIA. This second novel picks up where Red Sparrow ends with Dominika more determined than ever to make the Russians pay when she learns that Korchnoi was killed only minutes away from freedom. Themes in the novel include the impact of Dominika and Nate’s relationship on their work as spies, the use of tradecraft, and the power of jealousy and envy.