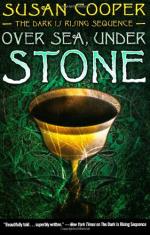 Get Over Sea, Under Stone from Amazon.com

Everything you need to understand or teach Over Sea, Under Stone by Susan Cooper.

Over Sea, Under Stone Summary

Over Sea, Under Stone is a fast-paced adventure story, full of exciting incident and perilous situations. The action is believable because it is firmly rooted in the ordinary people, customs, and landscape of Trewissick, Cornwall. Margery Gill's realistic pen and ink illustrations contribute to the strong feeling of place drawn by the novel. Cooper and Gill know this setting well; they lay out the story authoritatively and confidently.

The novel, however, is more than an adventure story; it is a modern fantasy, original but firmly rooted in the King Arthur stories. Merriman Lyon, who helps the children through their adventures, is Merlin, Arthur's magician, who is now living in the twentieth century.

Knowing the Arthurian legends enriches the reading of the novel, but is not necessary. The legendary and allegorical overtones emerge clearly from the story itself.

In the novel the physical action parallels the conflict of ideas...

The Over Sea, Under Stone Study Pack contains:

Over Sea, Under Stone Short Guide

Susan Cooper
5,224 words, approx. 18 pages
Called "one of the most versatile, popular, and critically acclaimed children's writers of the twentieth century" by Joel D. Chaston in the Dictionary of Literary Biography, Susan Cooper is considered... Read more

Susan (Mary) Cooper
3,031 words, approx. 11 pages
Although Susan Cooper has lived in the United States since 1963, she considers herself, and is considered by her readers, to be a British writer of fantasy. All of her major fiction resonates with the... Read more
Download the Study Pack