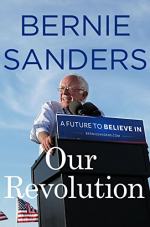 Get Our Revolution from Amazon.com

Everything you need to understand or teach Our Revolution by Bernie Sanders.

In the course of a year, Bernie Sanders went from an Independent Senator in the small state of Vermont to one of the nation's most progressive presidential candidates. Sanders ran an unprecedented grassroots campaign, one that shocked even himself. He ran on the platform of combating wealth and income inequality, reforming the tax and health care systems, ensuring universal health care and higher education, and protecting the nation's most vulnerable populations - seniors, children, the poor, the disabled, and veterans. Sanders' campaign was a self-titled political revolution, one that he argues could not stop after just one loss. His two-part book documents his road to and on the campaign trail, as well as his proposed agenda for a truly revolutionized America.

The Our Revolution Study Pack contains: