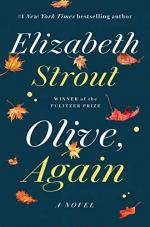 Get Olive, Again from Amazon.com

Everything you need to understand or teach Olive, Again by Elizabeth Strout.

Olive, Again, the sequel to Elizabeth Strout’s 2008 novel Olive Kitteridge, returns to the quiet fictional town of Crosby, Maine, an hour from Strout’s hometown of Portland. Like its predecessor, the novel’s 13 interconnected but discontinuous short stories follow the lives of the cantankerous Olive Kitteridge and several other families in Crosby, picking up a year after the previous novel ended. Told mostly through its characters’ recollections, the novel examines, among others, themes of loss, honesty, and regret.

You might also be interested in:
Olive Kitteridge
The Burgess Boys
My Name Is Lucy Barton
Anything Is Possible