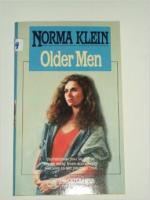 Get Older Men from Amazon.com

Everything you need to understand or teach Older Men by Norma Klein.

Older Men is a novel about Elise Dintenfass, a sixteen-year-old high school senior who at the time of the story's beginning has been accepted into Yale. An only child, she has an extremely close relationship with her father, especially enjoying the excursions the two of them take to New York City without her mother. Her father, Dr. Nate Dintenfass, is a fiftyfive-year-old, highly respected cardiologist. Elise's mother, June, who is thirty-seven, is Dr. Dintenfass's second wife. He left his first wife and married June after June became pregnant with Elise. He has several stepchildren from his first marriage, but at the beginning of Older Men, Elise has not met any of them.

In the course of the novel, June is hospitalized, supposedly for emotional problems, but Elise's maternal grandmother, who is also fifty-five, implies that Nate wanted her hospitalized so that he could be free of her and...