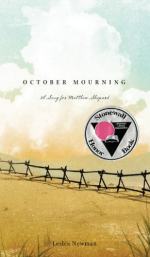 Get October Mourning: A Song For Matthew Shepard from Amazon.com

Everything you need to understand or teach October Mourning by Newman, Leslea .

October Mourning: A Song for Matthew Shepard, by Lesléa Newman, is a collection of sixty-eight poems written to inform and make sense of the murder of 21-year-old Matthew Shepard, a homosexual. The murder occurred in Laramie, Wyoming, in October of 1998. The book's intended young adult audience have most likely never heard of the heinous crime that brought attention across the country to the treatment of homosexuals. Using various forms of poetry from the perspectives of both animate and inanimate narrators, Newman tells Shepard's story from the first moments he met his murderers through their trial and sentencing. Newman was the keynote speaker for the University of Wyoming’s Gay Awareness Week that was scheduled to take place the week after Shepard’s death. Themes in the novel include the role of homophobia/ignorance in Shepard’s death and the need for compassion.