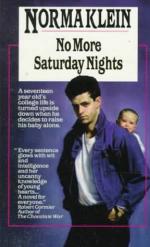 Get No More Saturday Nights from Amazon.com

Everything you need to understand or teach No More Saturday Nights by Norma Klein.

No More Saturday Nights treats a problem unusual to young adult fiction or any kind of fiction for that matter.

An unmarried young man, Tim Weber, decides to raise his child by himself.

When he discovers that the mother of his child is considering giving it up for adoption and receiving $10,000 in return, he goes to court and sues for custody. He believes that he will have to raise the child entirely on his own since his much older father, Abner, seems to take no interest in Tim. In the course of the novel, Tim learns of his father's great love for him and of his ability to do well as a single father.

The book has an aura of realism about it, although critics may argue that things work out too well too quickly for Tim and his son Mason. For example, he finds an excellent apartment...