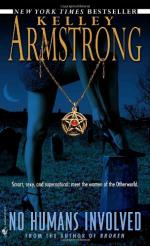 Get No Humans Involved from Amazon.com

Everything you need to understand or teach No Humans Involved by Kelley Armstrong.

Jamie realizes that she hears voices and is being touched...