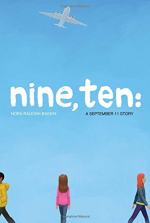 Get Nine, Ten: A September 11 Story from Amazon.com

Everything you need to understand or teach Nine, Ten by Nora Raleigh Baskin.

The genre of Nine, Ten: A September 11 Story by Nora Raleigh Baskin is historical fiction. The novel details how the lives of four very different middle school students from across the country were changed by the terrorist attacks of September 11, 2001. The students’ lives touch briefly in the days before the attacks and converge again in a powerful show of unity and Americanism on the one-year anniversary of the terrorist attacks. Themes in the novel include doing the right thing, the definition of a hero, and healing from grief.