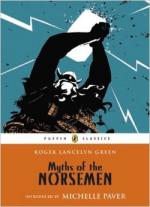 Get Myths of the Norsemen from Amazon.com

Everything you need to understand or teach Myths of the Norsemen by Roger Loncelyn Green.

Myths of the Norsemen Summary

Perhaps as long ago as 8000 B.C., a group of nomadic tribes wandered south into India and westward into central Europe from a homeland somewhere west of the Caspian Sea. These divergent groups shared a common language (Indo-European), a knowledge of farming, and the worship of certain gods.

First among their gods was a sky god, probably named something like deva (as in India) or Diu (Zeus) as in Greece. The Romans called him Diu-pater, or father god, which became Jupiter.

The names gradually changed as tribes settled in different places. Among the Germanic peoples of Central and Northern Europe the father-god was called Ziu (Old High-German) or Tyr (Icelandic). He was called Dia by the Irish or Tiw by the British, and from these names is derived "Tuesday." Other northern gods lent their names to the days of the week—Woden's day, Thor's day, and Freya's...

The Myths of the Norsemen Study Pack contains:

Myths of the Norsemen Short Guide