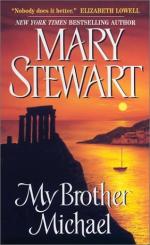 Get My Brother Michael from Amazon.com

Everything you need to understand or teach My Brother Michael by Mary Stewart.

Stewart combines the ideas of Shakespeare and Donne to create the major theme of My Brother Michael: being true to oneself while being involved in mankind. According to the hero Simon, who quotes both Shakespeare and Donne, the really great man sees the pattern of life and his own place in it.

He stands for the ideals which ancient Greece gave to the Western world — "truth, straight thinking, freedom, beauty." While committed to personal growth, Stewart's characters also care for each other, and not only on a romantic basis. Stewart thus wants her books to convey positive, humane values to her readers. In interviews she has clarified her position: "I don't want any one made troubled or unhappy by anything I've written; perhaps 'depressed' and 'hurt' are better words."

She expressed her disgust with the "anti" trend of the 1950s, "all the 'anti' brigade, the dirt brigade...