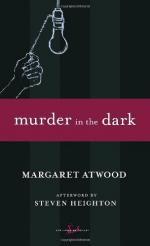 Get Murder in the Dark from Amazon.com

Everything you need to understand or teach Murder in the Dark by Margaret Atwood.

Murder in the Dark Summary

As Atwood is a prominent collector of themes, those found in Murder in the Dark are also found in her other works in one form or another. The most common themes found in Atwood's work are sexuality, marginalization of women and minority groups, social fears (such as growing old) as well as progression and movement, and the relationship between old and young (and the relationship between being old and being young), distrust of religion, patriarchy, issues of power, gender politics, body image, narrative voice and design, language, subversion of traditional literary forms, revisionist myth-making, history, satire, irony, Canadian nationalism, spirituality, the environment, feminist anger, bashing of males, public persona, coldness/unreliability of her narrators (as both the short story and the name of the book implies), and pessimism.

Murder in the Dark is comprised of four sections with twenty-seven prose poems in total. The first section consists of...

The Murder in the Dark Study Pack contains:

Murder in the Dark Short Guide

Margaret (Eleanor) Atwood
9,743 words, approx. 33 pages
One of Canada's most public literary personalities, Margaret Atwood has made her reputation as much as by being versatile as by being controversial. As a poet she has to date produced ten volumes of v... Read more

You might also be interested in:
The Heart Goes Last
Stone Mattress: Nine Tales
The Year of the Flood
MaddAddam
Hag-Seed