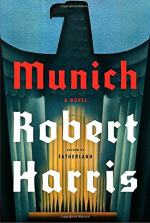 Get Munich from Amazon.com

Everything you need to understand or teach Munich by Robert Harris.

Munich by Robert Harris is a historical fiction novel with strong political thriller elements. It traces the events of the 1938 Munich conference from the perspectives of two fictional characters: Hugh Legat, an ambitious British diplomat, and Paul von Hartmann, a disillusioned German civil servant. The two old friends struggle between the dual specters of war and oppression as they attempt to avert the tragedy of World War II. Harris also draws nuanced portraits of historical figures including Neville Chamberlain, Adolf Hitler, and the leading members of both administrations. The novel explores the interconnected themes of violence and pacifism, pride and nationalism, historical perspective, the burdens of public service, and the shifting truths of politics.