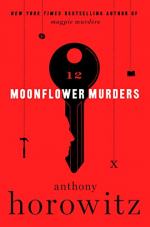 Get Moonflower Murders from Amazon.com

Everything you need to understand or teach Moonflower Murders by Anthony Horowitz.

In the murder mystery Moonflower Murders by Anthony Horowitz, Cecily Treherne MacNeil disappeared after she informed her parents, Lawrence and Pauline, that the man convicted of a murder that took place in the hotel they owned was innocent. She claimed the late author Alan Conway had incorporated clues to the real killer’s identity in his novel Atticus Pünd Takes the Case. To find their daughter, Lawrence and Pauline contacted Susan Ryeland, who had edited and published Conway’s novel. They believed she might see what Cecily had seen in the novel. Themes in the novel include the use of money, sex, and secrets as tools of power and the complexity of relationships. Horowitz also addresses to what extent a creator is responsible for the outcome of his work.