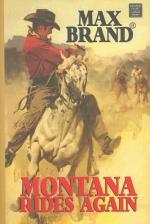 Get Montana Rides Again from Amazon.com

Everything you need to understand or teach Montana Rides Again by Evan Evans (Frederick Faust/Max Brand).

M ontana Rides Again, the second in a trilogy of novels about the Montana Kid, was composed, like the other two novels in the series, under the editorship of Cass Canfield at Harper's and published under the name of Evan Evans. As a result of the working relationship with Canfield, who wanted the Evan Evans novels to achieve a higher level of quality than the Max Brand westerns, Faust produced in this trilogy three of his finest works in the western genre. It is also clear that Montana Rides Again is one of those instances where a sequel is superior to its predecessor.

Montana Rides (1934), the first Montana Kid novel, is, to be sure, an exciting adventure story in its own right.

The first half tells the story of how two second-rate scoundrels recruit the Montana Kid to pose as the missing and long-lost son of Richard Lavery...