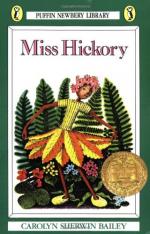 Get Miss Hickory from Amazon.com

Everything you need to understand or teach Miss Hickory by Carolyn Sherwin Bailey.

Miss Hickory is a story that centers on nature. The characters are for the most part animals, and the changing seasons play an important role. The reader observes the interactions between the animals and sees how each creature prepares itself to survive the winter. Although the story is a fantasy, Bailey does not idealize the situations. Instead she shows the harshness of winter and the unpleasantness of selfish behavior.

Miss Hickory, a doll fashioned from a twig, is in some ways admirable, but she lacks charm, gentleness, physical attractiveness, and the sorts of qualities that make characters immediately likable. She is well aware of her stubborn nature and is constantly trying to change. This makes Miss Hickory an interesting character because her actions are unpredictable.

The structure of the book is also unpredictable. Instead of following a traditional plot, it is episodic, meandering from the dilemma of Miss...