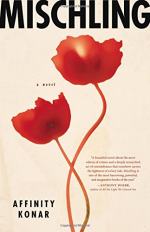 Get Mischling from Amazon.com

Everything you need to understand or teach Mischling by Affinity Konar.

In Affinity Konar's historical novel Mischling, twin sisters Pearl and Stasha Zamorski arrive at Auschwitz in 1944 where they are given over to Josef Mengele, a sadistic doctor with a "Zoo" full of people on whom he conducts experiments. Shortly before the camp's liberation, the twins are separated, Stasha believes that Pearl is dead, and Pearl's memory has been compromised by Mengele's torture. They each travel the war-torn countryside, Pearl seeking the "Someone" she barely remembers, and Stasha seeking her revenge on Mengele, encountering other survivors and villains amid the ruins. Their journeys weave together themes involving forgiveness, maintaining hope in desperate times, and bearing witness to the legacies of the victims of genocide.