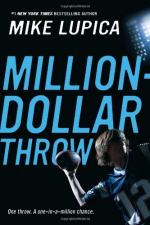 Get Million-Dollar Throw from Amazon.com

Everything you need to understand or teach Million-Dollar Throw by Mike Lupica.

In Million Dollar Throw by Mike Lupica, Nate Brodie is an avid fan of the New England Patriots. He is also the 8th grade quarterback at his school. Having recently been benched from his position on the team, the 13-year-old's life is far from carefree. His father has just lost his job, and Nate's best friend, Abby McCall, is going blind. When Nate's name is selected for a football throw contest that awards one million dollars to the winner, he is determined to make the most of the opportunity so that he can help those he loves overcome their obstacles.