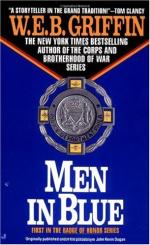 Get Men in Blue from Amazon.com

Everything you need to understand or teach Men in Blue by W. E. B. Griffin.

The theme of loyalty is very important in the series. The Department is, in many ways, portrayed as a family, one which disciplines, nurtures, and teaches its members. Therefore, as in the Corps series and the Brotherhood of War series, Griffin's effect in Men in Blue is to show the workings of this family — as evidenced by the way the police department reacts when Captain Dutch Moffitt is gunned down; at his funeral, over 300 police cars form part of the procession. Another dominant theme in the novel is that of honor and integrity — again, this is a theme which is dominant in the other series as well. Socalled "dirty" cops are seldom seen in Griffin's police novels. Instead, the reader is presented with characters from a variety of backgrounds who respond with distinct professionalism and pride in their jobs. The overall thematic impulse of the novels...