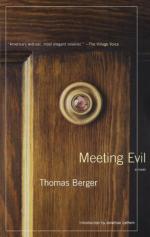 Get Meeting Evil from Amazon.com

Everything you need to understand or teach Meeting Evil by Thomas Berger.

The novel unites three recurring themes in Berger's work: the apparently random but utterly devastating impact of violence in modern American life; the general spirit of bad manners and surliness which prevails in much of American social life, and which motivates Richie's murders; and the psychological strength of the innocent Berger hero, after he recognizes the nature of the crisis he is in. The first theme had emerged as early in Berger's work as Killing Time (1967), with Berger's study of the benign insanity of Detweiler, and had also erupted in Vital Parts (1970), the third Reinhart novel, in the episode of the rifleman on the observation deck of the skyscraper.