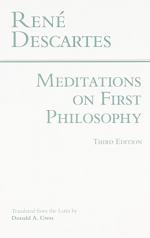 Get Meditations on First Philosophy from Amazon.com

Everything you need to understand or teach Meditations on First Philosophy by Descarte, Rene .

Rene Descartes' Meditations on First Philosophy, a series of six philosophical meditations or exercises, is one of the founding texts of modern philosophy and centers around the attempt to answer a single question: how can we really know anything? In the span of six consecutive meditations, Descartes starts out doubting the existence of everything, only to reconstruct all his knowledge from a single certain belief: 'I think, therefore I am.' A major break with medieval religious philosophy, the Meditations is motivated by an attempt to create a proper foundation for science as well as a worldview that can reconcile God with a universe governed by natural laws. Along the way, Descartes also tries to answer fundamental questions about the freedom of our will, the existence of God, the structure of reality, and the nature of the soul.