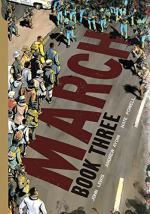 Get March: Book Three from Amazon.com

Everything you need to understand or teach March by Andrew Aydin, John Lewis, and Nate Powell.

John Lewis's book, March, Book Three, is the continuation of Lewis's work in the Civil rights Movement during the 1960s set against the backdrop of Barack Obama's inauguration as the first black president of the United States. Lewis maintains a strict policy of nonviolence as he meets many people working for and against equal rights. The main themes of the book include the right to vote, violence associated with the Civil Rights Movement, and prejudiced attitudes.