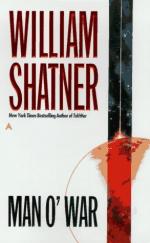 Get Man O' War from Amazon.com

Everything you need to understand or teach Man O' War by William Shatner.

Man O' War focuses on the problems created when economic and political realities bring human beings into conflict with one another. The desire of Martian workers to earn a decent living and to develop the surface of the planet rather than remaining sealed in the underground tunnels will be expensive. In order to attain their goals, profits from their only product, smush, must increase. Yet, rising costs on an overpopulated Earth will lead to social upheaval, rioting, and possibly even widespread famine. Attempts at negotiation have been futile, leading to the assignment of Benton Hawkes, the most successful negotiator in Earth-bound national and ethnic conflicts, to the project. Diplomacy and negotiation between seemingly irreconcilable opponents are key themes throughout the book, although when diplomacy fails, or when saboteurs are determined to subvert the peace process, violence erupts with sudden brutality.

The larger political issues are reflected in the...