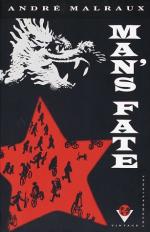 Get Man's Fate from Amazon.com

Everything you need to understand or teach Man's Fate by André Malraux.

Although the particular historical events around which his novels revolve may change, several recurrent themes dominate Malraux's literary perspective. For instance, exoticism and violence, blindness and suffering, and the ubiquitous presence of death appear throughout his writings. Malraux portrays the human condition as tragic, but it is precisely in confronting this situation, that man experiences hope.

His novels, therefore, oscillate between the pessimism of individual existence and the optimism of collective action.

In Man's Fate Malraux recreates the 1927 Shanghai workers' strike and Chiang Kai-shek's subsequent military struggle against the Communists, because he saw in this political cauldron a perfect metaphor for man's tragic situation as well as the ideal setting to express his own poetic image of mankind, namely, men united in death for a common cause. Unlike the historical reality it portrays, however, Malraux's fictional world demands that its hero die, for only in sacrificial death can...

André Malraux
1,179 words, approx. 4 pages
French writer and politician André Malraux (1901-1976) was generally regarded as one of the most distinguished novelists of the 20th century. Malraux holds the distinction of having been France... Read more

(Georges-)Andre Malraux
17,840 words, approx. 60 pages
André Malraux is one of the most misunderstood French writers of the twentieth century, both in his native land and in much of the English-speaking world. Despite numerous publications devoted ... Read more