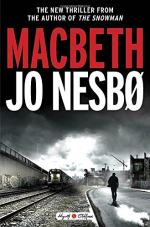 Get Macbeth: A Novel from Amazon.com

Everything you need to understand or teach Macbeth by Jo Nesbo .

Jo Nesbo's mystery thriller, Macbeth: A Novel, is a modernization of the Shakespeare play, and takes place in a dark, corrupt British industrial city in the 1970's. After quickly being promoted within the police force, affable everyman Macbeth suddenly decides that he should be the police commissioner, since he is best able to rid the town of corruption. However, Macbeth then begins a string of conspiratorial murders to reach the position, and the town descends into total chaos as he continues committing crimes to maintain his power. The novel is a cautionary tale about the dark aspects of ambition, as Macbeth's own ambitions only drive him to become more deeply corrupted.