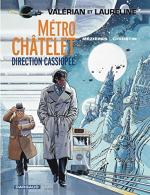 Everything you need to understand or teach Métro Châtelet, Brooklyn Station (Valerian) by Pierre Christin.

Chatelet Station Destination Cassiopeia and Brooklyn Line Terminus Cosmos are a two-part pair of graphic novels. The stories are part of a series written by co-authors Mezieres and Christin. The series covers the space and time travels of two heroes, Valerian and Laureline. These two episodes are set in 1980. Valerian is trying to figure out how and why a series of apparitions are appearing at various places on Earth. At the same time, Laureline is investigating the same situation, but from space and a futuristic setting. The book focuses on Valerian's state of mind, the consequences of greed, and cooperative collaborations.

You might also be interested in:
The Empire of a Thousand Planets (Valerian)
The Land Without Stars (Valerian)
Welcome to Alflolol (Valerian)
Birds of the Master (Valerian)
Ambassador of the Shadows (Valerian)