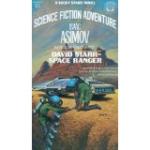 Everything you need to understand or teach Lucky Starr series by Isaac Asimov.

David Starr, Space Ranger is quintessential "space opera," with both the strengths and the limitations of that formula. Good prevails against evil, science over ignorance, the humans of Earth over threats from elsewhere in the galaxy. Continual action and descriptions of imaginative gadgets keep the pace of the narrative brisk. The lucid, straightforward prose includes frequent explanations of space phenomena in general and the planets in particular.

Like its sequels, David Starr, Space Ranger presents a mystery for readers to solve along with the hero.

In addition to a satisfying good versus evil theme and an action-oriented plot with a mystery angle, the novel offers appealing characters. David Starr (later known as Lucky) has brains, athletic ability, courage, and a welcome modesty; young readers can readily identify with this attractive hero. Bigman, the diminutive Martian who becomes David's devoted companion, offers comic relief. The villains are satisfactorily unpleasant...

Isaac Asimov
2,357 words, approx. 8 pages
The author of nearly five hundred books, Isaac Asimov (1920-1992) is esteemed as one of the finest writers of science fiction and scientific fact in the twentieth century.Asimov was born on January 2,... Read more

Isaac Asimov
5,460 words, approx. 19 pages
By the time of his death in 1992, Isaac Asimov was widely regarded as one of the most productive and versatile writers of all time. Asimov was best-known for his science-fiction novels and popularized... Read more

Isaac Asimov
10,485 words, approx. 35 pages
While Isaac Asimov officially celebrated his birthday as 2 January 1920, his birth date is uncertain. Records were not well kept in the U.S.S.R. in the period between World War I and World War II, par... Read more
Download the Study Pack