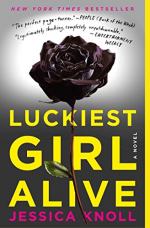 Get Luckiest Girl Alive from Amazon.com

Everything you need to understand or teach Luckiest Girl Alive by Jessica Knoll.

TifAni “Ani” FaNelli refers to herself as a different kind of trophy wife in the novel The Luckiest Girl Alive by Jessica Knoll. Even though Ani had tried to recreate herself since her high school years, she was still best known for her believed role in a school shooting at the prestigious Bradley School. Ani hoped that by telling her side of the story in a documentary she would finally be forgiven by the people who had judged her wrongly. Through the documentary, Ani finally gets acknowledgement from the boy who had raped her during high school that what he had done to her was not right. Ani tells her story from the first person point of view interspersing information from her high school days with highlights from the new life she has created for herself as an adult. Themes in the novel include the belief that protection can be found in success, the connection between food and emotions, and the devastating nature of invisible,emotional wounds.