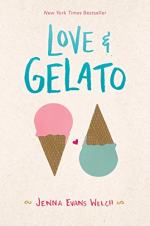 Get Love & Gelato from Amazon.com

Everything you need to understand or teach Love & Gelato by Welch, Jenna Evans.

Love & Gelato, by Jenna Evans Welch, is a young adult novel. The main character is Carolina “Lina” Emerson who is a high school sophomore facing life after her mother (Hadley Emerson) succumbs to pancreatic cancer. Lina's mother's dying wish is for Lina to travel to Florence, Italy. Once there, she is to live with Howard Mercer. It is Lina's grandmother who shares with Lina that Howard is her father. Fulfilling her mother's last wish, Lina travels to Florence. Once there, she is given a journal that her mother kept while she was in Florence as a young woman. Lina and her new friend, Lorenzo “Ren” Ferrara, study the journal in an attempt to discover why Lina’s mother had never mentioned Howard to Lina before and why he had never been involved in Lina's life. Themes in the novel include the parallels between a mother's and daughter's lives, Lina’s coming of age, and dealing with loss.