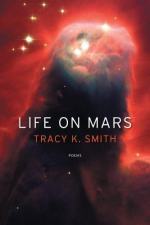 Get Life on Mars: Poems from Amazon.com

Everything you need to understand or teach Life on Mars by Tracy K. Smith.

Life on Mars, by Tracy K. Smith, is a collection of poems that covers a broad range of topics, from the museums of the future, modern day piracy, and Charlton Heston's autobiography. Written in the wake of the death of the poet's father in 2008, these poems are part tribute to his memory, part personal memoir, and part science-fiction novel. The book explores major themes such as the generative power of the imagination, the unknowability of death, alienation, the futility of human endeavor, and the undeniable pull of the past on the present.