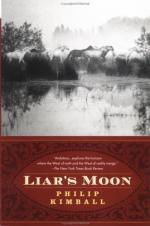 Get Liar's Moon from Amazon.com

Everything you need to understand or teach Liar's Moon by Philip Kimball.

The theme of identity and how it is created, performed, enacted, recognized, and preserved is another major thread to Kimball's story. "Black Woolly," the female raised by the coyotes, known as Little Sojourner before the coyotes took her up, becomes an adept horse wrangler and cowboy; most people who see her do not recognize her gender. This confusion, disguise or shape shifting, adds yet another motif to the story mix: the cross-dressed female in a "man's world" doing a man's job. The pioneer woman assumes here a somewhat different guise from that represented by the statues raised to her in such disparate locales as Ponca City, Oklahoma, and Upland, California.

Will, the white boychild raised as "Black Woolly's "littermate" by the coyotes, receives, as is traditional in the hero tale, assistance from a woman, Prissy Blackstrup, who teaches him how to become human, including, as is true with...