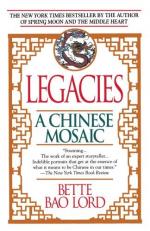 Get Legacies: A Chinese Mosaic from Amazon.com

Everything you need to understand or teach Legacies by Bette Bao Lord.

The main theme of the book is power and the ways in which power can be used to achieve the means of the state.

China was a feudal state with a massive population before the revolution.

After the revolution it was a Communist state with a massive population.

There were severe economic problems; the government decided that the nation had to be industrialized. This book details different types of modernization programs and their...