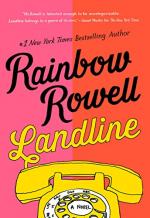 Get Landline from Amazon.com

Everything you need to understand or teach Landline by Rowell, Rainbow .

Rainbow Rowell’s novel for adults, Landline, focuses on the less-than-ideal marriage between college sweethearts Georgie McCool and Neal Grafton. The pair have been married for almost 15 years and have two daughters together. However, as Georgie becomes increasingly wrapped up in her television screenwriting career, she and Neal drift further apart. When Georgie decides to stay in Los Angeles to work on a TV pilot rather than traveling with her family for Christmas in Omaha, she fears her marriage is doomed. However, a mysterious landline reconnects Georgie and Neal, allowing a present-day Georgie to talk to a 22-year-old Neal who is still living in 1998. Ultimately, Landline grapples with ideas about fate and inevitability, as well as considering if love really is more important than compatibility.