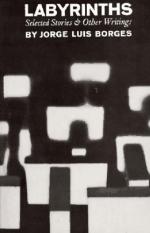 Get Labyrinths: Selected Stories and Other Writings from Amazon.com

Everything you need to understand or teach Labyrinths by Jorge Luis Borges.

Several important themes are developed in this rich collection of stories.

One is the theme of idealism, revealing Borges as a disciple of the philosophical systems constructed by Berkeley and Hume — among others — that assert that ideas are the only true measure of reality and that objects are nothing but imperfect and transitory images. In the universe of "Tlon," a perfect idealist construct, objects do not exist outside the idea of their existence.

Another theme, that of the interplay between reason and the absurd, appears in several stories in which man attempts to understand reality around him by conceiving of a world according to his own sense of the perfect form. Invariably this universe, as in "The Library of Babel," is just as — if not more — paradoxical and labyrinthian as reality: its mysteries as secret and obscure, its custodians as ignorant, and its limits...

The Labyrinths: Selected Stories and Other Writings Study Pack contains:

Jorge Luis Borges
786 words, approx. 3 pages
The Argentine author Jorge Luis Borges (1899-1986) was one of Latin America's most original and influential prose writers and poets. His short stories revealed him as one of the great stylists of the ... Read more

Jorge Luis Borges
5,157 words, approx. 18 pages
Although Ireneo Funes, a Uruguayan teenager, was paralyzed and confined to his chair, he "knew by heart the forms of the southern clouds at dawn on the 30th of April, 1882, and could compare them in h... Read more

Jorge Luis Borges
6,675 words, approx. 23 pages
The Argentine writer Jorge Luis Borges is one of the most prominent figures in contemporary world literature. Continuing the tradition of fantastic literature established by Edgar Allan Poe in the nin... Read more