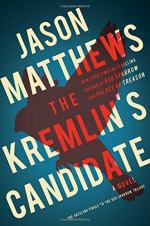 Get Kremlin's Candidate from Amazon.com

Everything you need to understand or teach Kremlin's Candidate by Jason Matthews.

The Kremlin’s Candidate by Jason Matthews illustrates how dangerous and unpredictable the life of a spy can be as Dominika Egorova suffers the loss of what she holds most dear in order to protect herself. This novel is the third installment in the Red Sparrow trilogy. As Dominika gets closer to Putin, her position as a double agent becomes more dangerous. Though her boyfriend and handler Nathaniel “Nate” Nash presses Dominika to defect, it is Dominika who has to save Nate. Themes in the novel include the troubles faced by the CIA, Putin’s far-reaching power, and Dominika’s strength both as a woman and a spy.