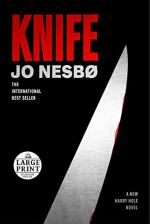 Get Knife from Amazon.com

Everything you need to understand or teach Knife by Jo Nesbo.

In the novel Knife by Jo Nesbo, detective Harry Hole is set on revenge after his estranged wife, Rakel, is murdered. He usually has a good memory, even when he is drunk. However, Harry remembers nothing of the night that Rakel died. He has been told that he had been drinking at a bar and was taken home by his friend, Bjørn Holm. Suspended from active duty, Harry begins his investigation. As Harry eliminates suspects, he begins to believe that he killed Rakel. A question raised by the novel is whether or not all men have a natural instinct to kill. Other themes include the need to make amends, vigilante justice, and the significance of biological relations.